The trouble with America(n Politics) in one simple picture 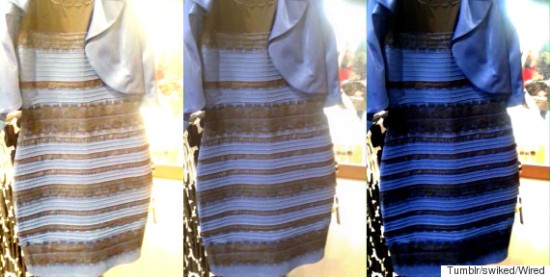 After neurologists familiar with the workings of the brain
and ophthalmologists familiar with the visual process of the eyes and the brains
and physicists familiar with the nature of light waves
along with  any number of photographers who have ever had to adjust the white balance on a photo (which is done is a much more responsible manner than it is with determining Electoral districts)…
after all of those learned people have all explained why some people see black-and-blue
and others see white-and-gold…
the attitude, mindset, conclusion and heartfelt belief of most people
is that the dress is whatever damned color it is
because that’s what they say it is.

Fuck the truth of the matter.
Only confuses the issue.
Their view is the only one that matters.
Their beliefs are the only acceptable ones.
Their version of the elusive truth is axiomatic..

Well, they’re wrong.
’cause I say so.

A little sidebar to further illustrate the point:
a dear friend of mine from back during my Morrison years was a gentleman by the name of Art Gore. A photographer who had a shop in town and some of his works hanging in the White House.
Still life and landscape visions that could leave you breathless.
Also had a cat named Tommy Tucker, the subject of a number his photos and a few poems. A cat who was known to hump chickens every now and then, not the strangest thing to happen in Morrison back then by any stretch of the imagination.
Here’s a sample of some of the work Art did right outside his studio, ten feet off of Bear Creek Avenue as it entered Morrison and the Rockies:

Knowing Art, this was probably taken with his 4 X 5 Linhof, Vericolor Professional sheet film, no filters, not even any metering. The “Sunny 16” rule of photography. Art just had an eye for such things.
Just one eye.
The one that wasn’t glass.
The one that was color-blind.
Art actually used to have to come in to the Tabor Inn (the hippie/biker bar next door to his studio) to ask some of his more trusted and relatively-sober-at-the-time drinking buddies if the color in a print he just made looked… well …  “right”.
There were many times he just didn’t know.
Subsequent prints could very well have been fine-tuned and adjusted according to the observations and recommendations of the local drunks. They would be based on the perceptions of others.
Art was, after all, making and marketing and selling those prints to people who didn’t see things the way he did. Or, rather, he didn’t see things the way they did.
Majority rules, right?
I mean, Art knew what he saw but he just had to make sure it matched what one could fairly confidently refer to as “reality”.
But he sure as shit knew the strawberries weren’t green no matter what his eye told him.
He knew and acknowledged and accepted that his interpretation was not always right.

Getting harder to find people like that.
And who actually uses film any more?

With years of practice and experience and remaining both open to and dependent upon the perceptions of others, Art grew to recognize what his singular and particular shade of green actually translated out to on the color wheel.
Might have been a kind of pumpkin / salmon concoction.

Yeah…
I sure do miss Uncle Artie.