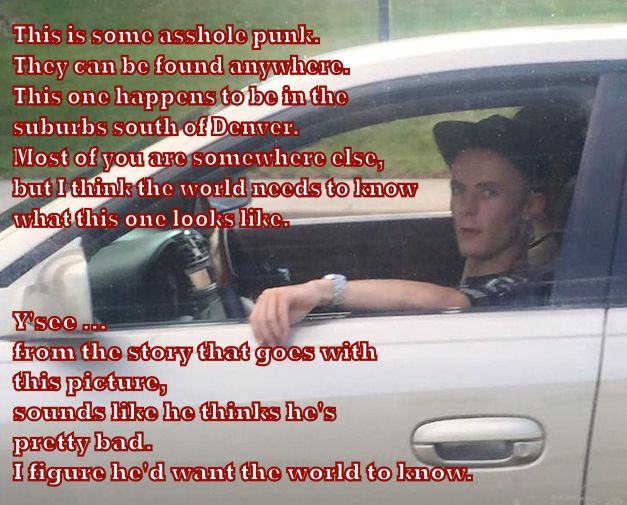 The following is from a publicly shared Facebook post by a woman who lives in Morrison, CO. Incident took place in what sounds like Lakewood, the southwestern-most suburb of Denver
on June 23, 2015.

“If this is your child or you know who this kid is please make sure this gets to his parents. So they can be proud of him(sarcasm). As he is pulling out of King Soopers parking lot he gets in line slams on the horn when the light turned red with six cars in front of him (mine being in front) and then sat there flipping everybody off and got on everybody’s asses and weaved in and out of traffic speeding– you could hear the car. He does have Green temporary plates and is driving a gold car headed down Kipling going south with a bunch of kids in his car. Not to be a winch but I don’t want it on my conscience if he’s driving and ends up killing somebody because of his driving skills and temper/road rage.

“If my son was on the road doing this I would hope it would get back to me so I could take his driving privileges away and vehicle. Kids need to be taught how to drive and not just thrown the keys, they need to learn its a privilege and not just something they get at 16, they need to earn the right to be behind the wheel imo. This kid could of flipped the wrong person off and they follow him and shoot everyone in car- he could of cut the wrong person off and same happened or he over corrects his car and rolls it killing all in car while he walks away. Parents please be responsible for your children…

You might be wondering why I’d be sitting out here in the Central Valley of California worrying about some crazed teen terrorizing the streets of Jefferson County, CO, but the thing is I see a whole bunch of dipshits like this every day of the week.
Of course, they don’t all look like this: some are older (lots and lots of them actually), some might be younger. They could be shorter, stockier, have a fuller face. You know, less of the “Meth Freak In Training” going for him than this kid. With that little Heisenberg beanie cocked back on the zenith of his pin head, the look of an in-bred crypt keeper who couldn’t cut it in “Remedial Nose Breathing 101” and failed “Introductory Chewing with Mouth Closed”.
But the lady shared a rather decent picture of this moral eunuch, of course looking so proud of himself for being such a bad-ass. That brain-dead arrogance often shown by people who have so little respect for themselves they have to talk their self-absorbed psyches into believing they can force it out of other people by, well, acting like a total asshole.
You probably know what it looks like when a runt-of-the-litter chihuahua is backed into a corner.
Same thing.
In this instance it would seem the punk’s rage was ultimately directed not at any one individual who might not have realized who he IS but at the fact that there was traffic.
Traffic!
In his way!
In HIS way!
Road rage.
And it’s just getting worse.
Here’s a thought:

In a wide variety of criminal infractions, there are what is known as Special Circumstances that can be added onto the original charges. Think “Hate Crime”. Or “Lying in Wait”.

special circumstances : n. in criminal cases, particularly homicides, actions of the accused or the situation under which the crime was committed for which state statutes allow or require imposition of a more severe punishment. “Special circumstances” in murder cases may well result in the imposition of the death penalty (in states with capital punishment) for murder or life sentence without possibility of parole. Such circumstances may include: rape, kidnapping or maiming prior to the killing, multiple deaths, killing a police officer or prison guard, or actions showing wanton disregard for life such as throwing a bomb into a restaurant.
(from http://legal-dictionary.thefreedictionary.com/special+circumstances)

We need to get legislators on board to make “Road Rage” an actual “special circumstance”. Tack in on to speeding or reckless driving or vehicular assault.
There needs to be a mandatory license suspension for one year upon a court’s finding of Road Rage. Anger management classes also made mandatory for those twelve months.
Formal report-every-month probation.
Six months house arrest. Ankle bracelet. Offender goes to work (or school) by a court approved manner and route and nowhere else that doesn’t involve a doctor’s note or further court approval.
Along with the suspension and counselling comes a mandatory psychiatric evaluation at the offender’s cost, once upon the finding of Road Rage, a second one after the tenth month of the license suspension to see if the return of the license is a safe option.
Shouldn’t be a problem. A motor vehicle can be a dangerous, deadly weapon.
Even the NRA says it pretty much sort of almost doesn’t want any seriously unbalanced individuals having their hands on any weapons (unless, I’m figuring here, that individual is a dues-paying member who always votes the way Charlton Heston would want them to), so why would they want that same sociopath with their hands on the wheel? Why would any of us?
The thing is …
it’s a pretty safe supposition that any self-absorbed prick (or prickette) who gets away with taking their life’s frustrations out on anybody travelling in front, behind or alongside them for having the nerve to be travelling in front, behind or alongside them will likely keep doing it.
Their ego tells them they’re justified in doing so.
After a while, they’ll just look for excuses.
And sooner or later someone could very conceivably die.
All because some punk (or punkette) had their fragile little feelings hurt and frankly couldn’t give an enema-fueled shit about who has to pay for it.